Sitting On Our Hands 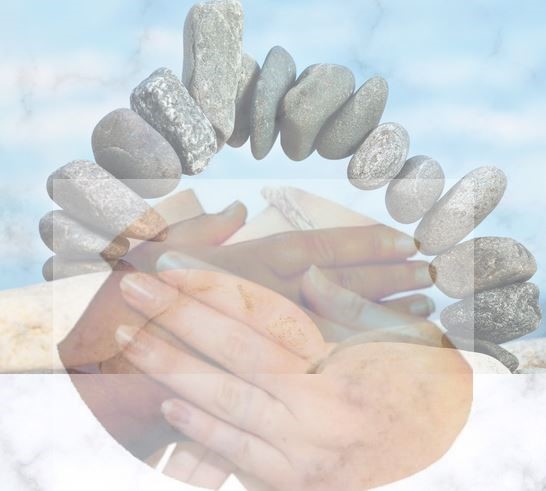 Ciaran Mulhall of Solus this week sets out his tour d’horizon for the rest of the year ahead.

COVID Watch
"As we try and assess where the world economy stands - six months into the first global pandemic in 100 years – we are struck by the extent that developments are still being driven by the virus. Both monetary and fiscal policy has had some effect in terms of dampening the economic shock, but the long term path of global growth is still very much dependent on the successful sourcing of a vaccine along with developments in treatments that reduce the fatality rate. Lock downs or no lock downs, as the United States currently shows, if people do not feel safe returning to their pre Covid 19 routines then they are unlikely to do so, regardless of what is or is not officially permitted.
Figure 1 Covid-19 Confirmed Cases 5 Day MA % Change 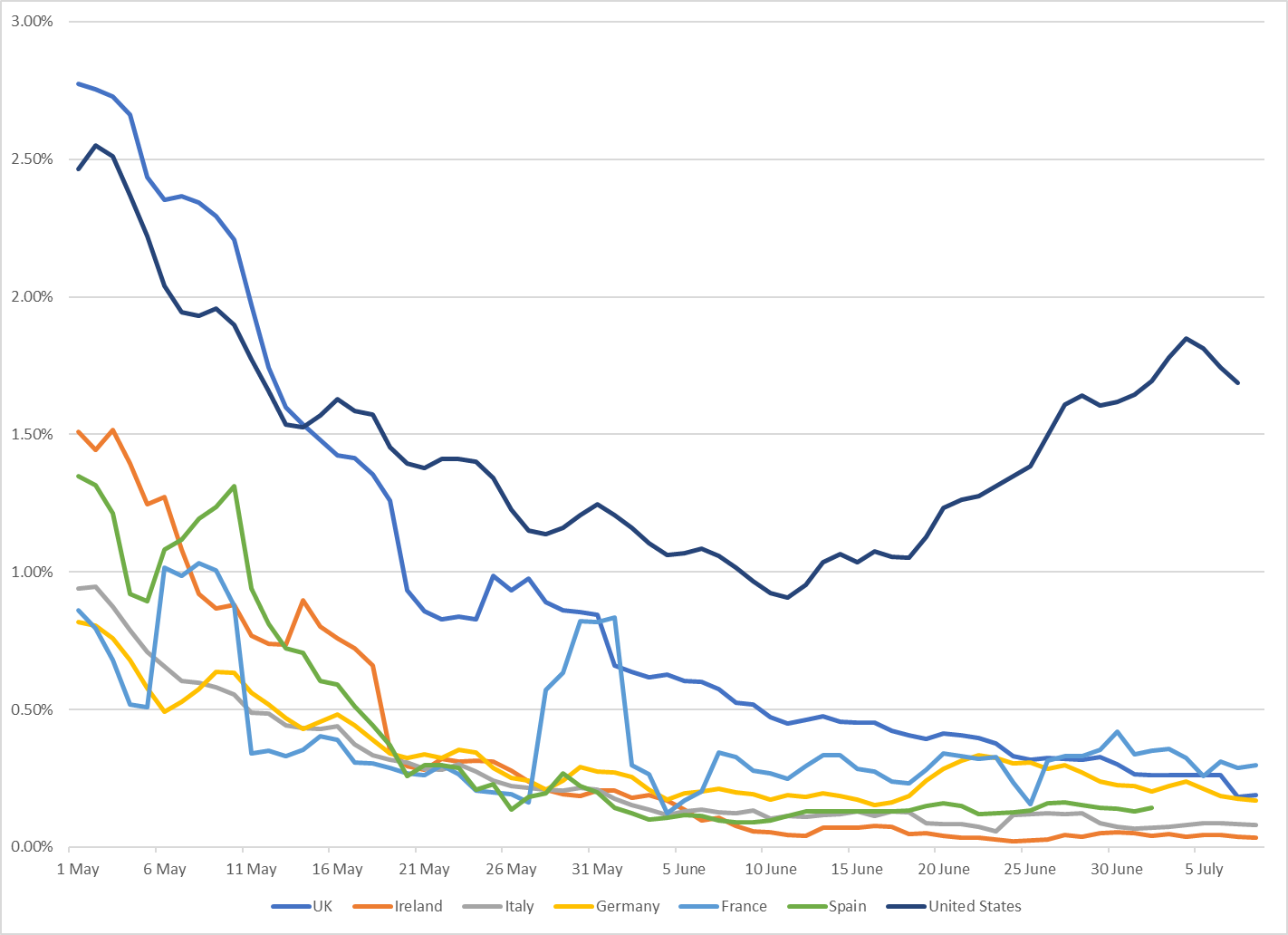 Before we discuss our concerns for the future - it is important not to ignore the recovery in growth we have seen over the last couple of months, estimates suggest that global GDP has now made up roughly half of the 17% drop seen from mid-January to mid-April, with substantial gains almost universally. Global manufacturing and service PMIs surged nearly everywhere in June and are now back to around 50 in many countries. Suggesting some return to expansion, albeit from a lower base than before. 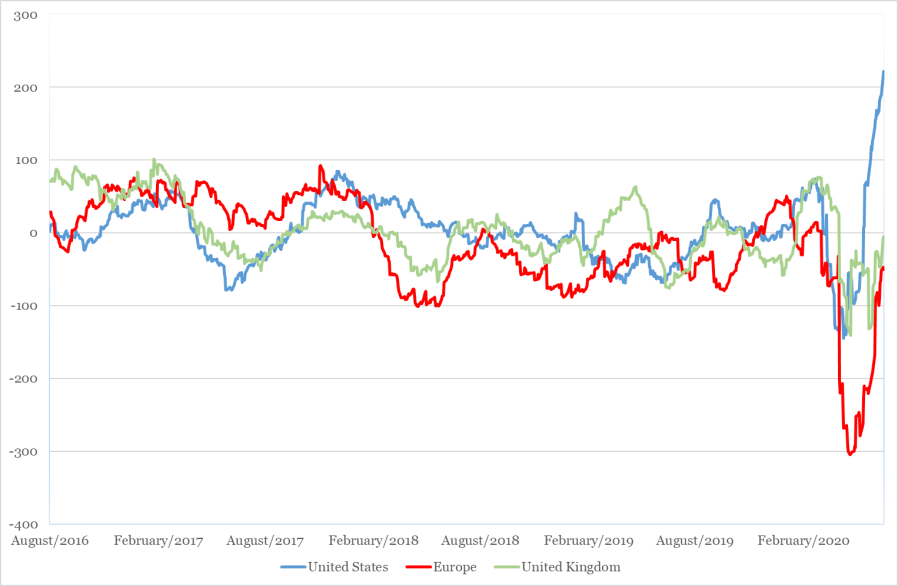 However, the sharp increase in confirmed coronavirus infections in the US (see chart at the top of this piece) has raised fears that the recovery in global growth might soon stall.

A significant part of the increase reflects higher testing volumes—which together with younger patients and better treatments, will likely keep measured fatality rates lower than in the March/April wave. Nevertheless a broader look at the Centre for Disease Control criteria for reopening, shows that not only new cases, but also positive test rates, the share of doctor visits for covid-like symptoms, and hospital capacity utilization, have all deteriorated meaningfully in the last few weeks. Moreover, these pressures have already persuaded many states and cities to put reopening on hold or start to roll it back. But again, regardless of the official reaction, consumer behaviour has begun to front run the worsening backdrop, as evident by the slowdown of, for instance, online restaurant reservations after an initial sharp bounce back. 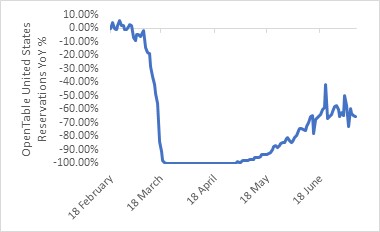 Reasons to be cheerful about the world economy
There are reasons to be hopeful that we are not about to embark on a re-run of the March/April collapse in US economic activity.
It is important to point out though, that the virus is still in the driving seat – to force down the R number in the US from this point will require a greater degree of co-operation from the population than we have seen (outside of the north east) to date.

Powell Policy - the monetary and political backdrop
We now expect the Federal Reserve committee to publish its much-heralded fundamental framework review within the next couple of months—including an expected shift to average inflation targeting—with the possibility of more aggressive outcome-based forward guidance. In terms of what that revised forward guidance might look like, our view remains that the most natural approach for a central bank with a dual legislative mandate would be to combine the two, e.g. by requiring core PCE inflation of 2% year-on-year and a labour market at or near the committee’s estimate of full employment. This would appear to force a more expansionist policy, with both targets currently well adrift.

Biden Burden - likely US Election outcomes
Looking ahead to the presidential election in November - polls have swung further in former Vice President Biden’s direction. He is ahead by about 7pp in Florida—currently the most likely "tipping point” state for reaching 270 electoral college votes—and prediction markets now imply a 55% probability that the Democrats will gain control of the White House, as well as both chambers of Congress. While the macroeconomic backdrop is very different – this outcome would not be too dissimilar to what happened in 2009. In any event this result would imply an increase in the Federal corporate income tax rate, alongside higher personal taxes on upper income earners.

While the above would pose a challenge for risk assets - other implications of such a political shift could be more market friendly. Although tensions with China will undoubtedly persist regardless of the election outcome, a re-escalation of the trade war would become less likely and the prospects for international cooperation on vital issues such as climate change would improve.

Europe and beyond
Outside the US, the cyclical news is generally positive. We are very optimistic in Europe, where the new infection numbers remain low (again see chart above)—the spike in confirmed cases in Germany last month has proven temporary—and the high-frequency economic indicators are showing a robust rebound. After hesitating initially, policy has also turned very supportive.

Although we expect the EUR750bn Recovery Fund to shrink slightly to EUR600bn before implementation, it is coming alongside aggressive ECB asset purchases that should suffice to close the sizable "funding gap” of its underperforming Southern member states.

Turning then to Emerging Markets, case numbers and fatalities remain extremely low in most of Asia but continue to surge in Latin America, with CEEMEA in between. The same ordering is also visible in the economic growth numbers, with Asia back in solidly positive territory but Latin America lagging. Although we expect growth to bounce back relatively sharply later this year, even in countries with weaker virus control performance, the crisis is likely to have lasting effects on the level of GDP and the degree of spare capacity. This should keep inflation low and enable EM central banks to keep monetary policy very easy for some time.

The way ahead
So, taking all the above into account where do we currently stand in terms of our investment process and its three pillars (Strategic, Dynamic and Tactical)

Strategic: Positive
Global economic activity continues to rebound as the world learns to live with the virus by keeping selective restrictions in place. While this level of economic activity will remain materially below potential growth, we remain confident that both the fiscal and monetary response can continue to support markets as we wait for a vaccine.  This suggest to us that we should remain invested in risk assets, with a somewhat lower level of risk-free assets, given that their return profile (outside of EM) is now so poor. We continue to use cash holdings to dampen portfolio volatility (remember the VIX is still around 30%) – cash that can be deployed during what we expect to be many risk asset drawdowns in coming months.

Dynamic: United States underperformance and a weaker USD
We expect the US to underperform in the near term as it partly reverses its overly hasty reopening in the consumer sector, combined with stretched valuations particularly in the Technology space. This suggest to us that Europe – after several years of underperformance, could see at least some positive fund flows particularly as valuations are much less stretched.

The weaker USD theme should also benefit Emerging Markets – particularly in Asia where, as we noted above, the effects of the virus has been modest. We continue to favour a large position in Large Cap Asian stocks (ex-Japan) with a focus towards China where we see significant further stimulus coming down the tracks.

Tactical: Plenty of Trading Opportunities
There is a certain amount of tension between these forecasts, and cyclical assets might struggle to reprice higher until that contradiction has been resolved – historically it has been difficult for global markets to move ahead without the United States at least keeping pace. Indeed, with the negative market view combined with the pending US presidential election – we see plenty of reasons for markets to sell off over the next few months. But any drawdown of 7-10% will likely be met by us allocating at least some of our cash pile to the dynamic themes already outlined.”
< back